Shark finning kills an estimated 73 -100 million sharks globally per year. Tens of millions more sharks and rays are killed each year, primarily through illegal, unregulated and unreported fishing (IUU). 181 shark species are Red listed as vulnerable, endangered, or critically endangered by the International Union for the Conservation of Nature (IUCN).

Shark-finning is a practice where sharks are caught and their fins are cut off, then the body of the shark is discarded. Shark fins are particularly sought after for traditional Chinese medicine and shark fin soup which is considered a delicacy in Asia. Catalyzed by the shark fin trade, large shark populations are declining globally, and many species are imminently threatened with extinction.

What is Shark Finning ?

Shark finning is the practice of removing the fins from a captured shark, and discarding the animal at sea, still living or dead. This reprehensible and wasteful act is largely driven by the high value placed ion the fin, and the low value off shark meat, Sharks captured as bycatch- (an untargeted animal)- in the tuna and swordfish industry were once released, but are increasingly killed for the fins. The high value and increased market for shark fins is creating huge incentive for fishermen to take the fins and discard the animal, leaving room in the ship’s hold for the more valuable meat of the tuna or swordfish. Shark finning is wasteful, inhumane and unsustainable.

Since 2000 several countries including the United States have adopted laws within their waters to ban this practice. A few, such as the United States and Australia, have successfully enforced these new laws, yet fins are still legally sold of from landed sharks, and Loopholes can lead to a misrepresentation of species captured, smuggling of fins, and more sharks killed than actually reported. The ICCAT and the West PAC: member commissions of Atlantic and Pacific pelagic fisheries have banned shark finning in their tuna and swordfish longline fleets. This is a good start but difficult to enforce against smugglers or poachers. Although over 100 species are listed by the IUCN as endangered or threatened, only a few species are protected from illegal trade by the Convention on International Trade in Endangered Species of Fauna and Flora (CITES). However, small boats and nations who do not recognize CITES or other treaties are actively shark finning and trading with impunity. The best solution to save sharks will rely on national and international efforts to regulate fisheries, and local efforts to limit consumption of shark fin and stopping the fin trade.

Can Shark Fins be Sold Legally?

The shark fin trade is global and widespread. In the USA, the sale of fins is banned in 11 states including California, New York and Hawaii. However, state-level bans do not bar the import of foreign-caught shark products into the United States. The US imports shark fins from countries that do not have shark finning bans including China, India and Indonesia. Currently there are very few regulations on the sale of shark fins globally. Shark fins can be sold legally in countries with anti- finning regulations, yet the source of the fin and method killed can still be illegal. These agreements require the shark carcass to arrive at the dock with the shark, or if severed, on an agreed fin to body ratio. In some regions like the EU, this ratio is so high that it allows more sharks to be captured than reported by the actual fin weight. Most shark fins go to Hong Kong for processing, and reexported to China and other countries like the US. Fins traded as a dried product do not have any documentation of where that shark was captured, the species or if it was legally harvested or finned on the high seas. Most shark fins are virtually unrecognizable by species. Once it is in the market or in the bowl, most consumers will not know where the fin came from, or if it was harvested legally or illegally. 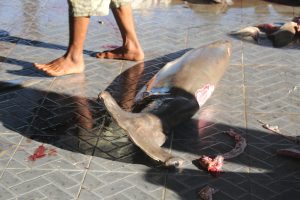 What Sharks are killed for their fins?

Any shark is fair game, but some species are more prized than others. The large fins of Whale Sharks, Basking Sharks are coveted for decoration at restaurants. These species are among the most threatened. Pelagic species such as Oceanic White tip and Silky sharks are common in the high-end trade. Illegal fisheries such as those that target the Galapagos, Cocos Island reserve and other remote islands capture reef sharks and hammerhead sharks. The Blue shark is among the most common traded with an estimated 20 million killed for their fins annually.

By nature, sharks are difficult to study and good fisheries data are hard to obtain. The practice of finning, which is mostly an unreported practice is robbing scientists of population and capture data. Many pelagic shark species are widespread and do not school. Many larger sharks travel vast distances alone. Most large sharks have late onset of fertility (decades) give birth to few young and have long gestation periods, making them very vulnerable to overfishing. Therefore, it is very difficult to arrive at a sustainable number. This is why most commercial shark fisheries collapse economically. With accurate population numbers, a good understanding of the target shark’s biology, and accurate reporting of animals captured, a sustainable fishery might be achieved. Until that is achieved and it can be enforced, then the source of fins must stop and fins made illegal.

What Sharks are Protected or Most at Risk?

The International Union for Conservation of Nature has designated Red List status to nearly 100 species of sharks. A 2015 report by the IUCN finds that over 25% of sharks, rays and skates are threatened with extinction. A 2004 study by Baum and Myers suggests that 90% of many large species have been overfished.

CITES regulates import, exports and does not protect living sharks.

Great white sharks are protected under California and Federal Law from fishing commercially or recreationally. Even,fins from these protected sharks have been identified in the shark fin trade through DNA analysis.These laws regulate the trade and transport of listed species across country lines by countries that recognize the treaty. To date,169 countries have agreed to be legally bound by CITES. Nearly twice as many nations had teams in the World Cup.

In 2006 investigators performed DNA testing on wholesale shark fin distributors, discovering the fins of the few protected species in Hong Kong, Singapore and here in the US. In 2010 Shark Stewards, working with at the California Academy of Sciences sequenced 17 species of sharks from shark fins bought in San Francisco Chinatown, including threatened species like thresher sharks, and endangered hammerhead sharks. Once the fin is dried and treated, the species is nearly unidentifiable. The protections in place are not strong enough, or broad enough to protect sharks.

How are Shark Fins Used?

Shark fins are used to make shark fin soup, a delicacy once prepared exclusively for the Chinese emperors and nobility. The cartilage from the fin is carefully dried and prepared, and used as an ingredient in a soup flavored with seafood or chicken broth and herbs. The process of preparation makes this dish very costly, as much as $100.00 a bowl, and is commonly served at banquets and weddings. The serving of the dish is considered very prestigious and even propitious.

Dried shark fin is the most expensive seafood product by weight, and is creating huge incentive for fishermen to hunt sharks, solely for their fins. Sold for upwards of $1,000 per kilogram ($2,200 per pound), dried shark fin is among the highest valued seafood by weight.

Although Chinese and people of Chinese descent primarily consume the dish, the consumption is increasing in western societies with affluent consumers, Asian and non- Asian. Around 50% of the dried fin market is brokered through Hong Kong and China is the primary market for shark fin. However, shark fin is still a major trade and is consumed widely in the USA, putting shark populations at risk. According to the UN FAO, other countries reported exporting 600 metric tons of shark fins into the United States in 2011

Shark Fin Soup is Associated with Asian Cultural Celebrations. Is This an Attack on Asian Culture?

This is an attack on an unsustainable fishing practice and trade. The cultural associations are modern, associated with prestige. The problem is simple economics: increasing affluence creates increased demand. This demand is exceeding the supply, which is creating a positive feedback loop, making the shark fins more difficult to obtain, and increasing the price, making the dish more expensive, increasing the prestige. This in turn motivates fishermen to obtain shark fins from a steadily diminishing source of sharks. Many countries have had practices associated with their cultures that were recognized as harmful or unethical and were stopped to protect wildlife.

Shark fin soup has been associated with a variety of benefits from increased virility to longer life. However, the fin is purely cartilage, the same compound in human, cow and other vertebrates. Cartilage has no nutritional value. Any benefit would come from the broth and other ingredients added. A 2012 study of fins from seven species of shark found a neurotoxin known as BMAA in 80 percent of 29 samples. A follow-up study in 2016 discovered BMAA in 87 percent of 55 fin and meat samples spanning 10 different species. BMAA may be a risk factor for several degenerative brain disorders including Alzheimer’s, Parkinson’s and Lou Gehrig’s disease, or ALS. The highest concentration of BMAA was detected in the fins.

Shark fins are also high in mercury, a known reproductive, developmental toxin and one that can cause permanent nerve and brain damage. The process of treating and drying shark fins can actually concentrate mercury and make the levels higher. The US FDA recommends that pregnant and breastfeeding women and children avoid eating sharks, swordfish and certain kinds of tuna. Fetuses, infants and children are at particular risk because their developing brains are more sensitive to disruptions from mercury and other neurotoxins.

The World Health Organization has tested shark fins and determined some fins to be so high that one bowl of soup would exceed the recommended exposure. Shark Stewards has similarly tested fins for soup and determined that people who consume shark fin soup even occasionally are at risk to high mercury levels.

As apex predators, large sharks like great white sharks play an important role at the top of the marine food chain. Without them, the entire food chain can be affected, negatively impacting the entire ecosystem, including fish humans love to eat.

Large shark populations are plummeting due to overfishing and the shark fin trade. In general this group of fish is slow growing, late maturing, and produce few young compared to other fishes. These characteristics make them especially vulnerable to exploitation by humans. Many species of sharks are in peril. Act now!

We rely on your Support– Please share and Join Shark Stewards saving sharks.