Since 2009 Shark Stewards has hosted community events celebrating the return of adult white sharks to our National Marine Sanctuary after migrating thousands of miles across the central Pacific ocean. We use the season of elevated risk of an encounter to raise awareness that sharks are important to ocean ecosystems and that many species are at risk of extinction.

Sharktober is the period when adult white sharks return to the west coast after a long migration from the white shark cafe in the central Pacific. It is a period of maximum probability to see or encounter a white shark along the west coast California coast. It is also a time when Shark Stewards celebrates sharks and hosts Sharktoberfest celebrations in California and virtually, and motivates the public to embrace their importance and help protect endangered sharks and rays from extinction.

You are a highly prominent figure in the shark and marine conservation world, how did you discover this passion?

I’ve always loved sharks and sought them out on my dives to photograph and film but I didn’t begin to study them until I learned about how threatened many species are. Growing up off the coast of Southern California and later in Santa Barbara as a marine biology student, I frequently observed and dove with sharks. Later on I learned to film and photograph underwater and began to study behavior and populations in the South Pacific. Since then I have worked on several shark studies, helping tag and track and collect DNA from sharks in the South Pacific, in the Caribbean and off San Francisco.

A little over ten years ago while diving and filming in the South Pacific I witnessed something so beautiful and so terrible it changed the course of my life.  While on a sailing expedition visiting remote South Pacific reefs I discovered the magic of diving with hundreds of sharks in wild ecosystems. While documenting marine wildlife and coral reefs, we dived islands with so many sharks the experience was eye popping.  But as we sailed west, we encountered islands with few or no sharks where they should have been abundant. We observed and documented dead sharks with no fins and later in the main port, a Taiwan registered ship lined with shark fins. After returning to the US I did research and learned how serious the shark fin trade was having on sharks globally.

One third of the large oceanic sharks are threatened with extinction. In my lifetime we have seen some populations decline to less than 10% of their original population.  Some predictions place outright extinction in another thirty years at the rate we are fishing. This is driven largely by the shark fin trade, and when I returned I founded Sea Stewards (now Shark Stewards) to fight for sharks. We produced a documentary on shark finning and stopping the shark fin trade called Shark Stewards of the Reef with Trillium Films in 2007. Using this film to advocate for shark and marine protection, we wrote and introduced the California Shark Fin Ban, AB 376 which went into full effect in 2013.

My understanding is that this “Sharktober” is a yearly phenomenon around the Bay Area. And why is October the month we celebrate it?

Surfers along the coast have been observing more sharks for years during the months of September- December and we call these months Sharktober. Most of the human- white shark encounters occur in our area during these months and the press generates a lot of negative attention, so we decided to celebrate, not hate, sharks and branded our outreach efforts Sharktober. I grew up surfing and and am active in what is called the Red Triangle- where most white shark attacks occur in California- mostly in the fall months. We created the Sharktober celebration in October because that is when the white sharks return from an annual migration west of over 5000 miles. They arrive in august and our observations and encounters peak around October. We created these education events to celebrate, not hate sharks. It is also the time when most human-shark encounters occur, and along with it a lot of negative press for white sharks. To counter this, we work with shark survivors like Jonathan Kathrein (1998, Stinson Beach- coauthor Surviving the Shark), Erik Larsen (1991, Davenport) and our new Southern California Chair Maria Korcmaros (2017, Corona del Mar). Shark Stewards does public events with shark survivors, telling their tales and speak ing on coexistence and conservation. We also appeared in Shark Week with Pew’s Debby Salmone and a score of shark survivors to advocate for increased federal shark conservation in the USA! 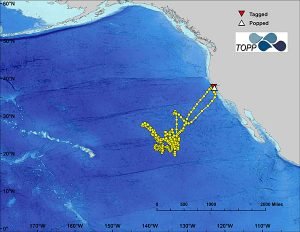 With satellite tagging, scientists have demonstrated that in late August and early September the mature white sharks return to our coastline after an incredible migration from over 2000 miles west.  Previously, researchers with the Point Reyes National Bird Observatory (now Point Blue) on Southeast Farallon Island started documenting the uptick in observations about twenty years ago. Peter Pyle and Scot Anderson started observing shark- elephant predations in the early 90s, and began tagging and identifying individual sharks there. But it wasn’t until Stanford’s TOPP lab started tagging sharks using pop-up satellite (PSAT) tags around 2005 that we learned the large sharks leave our coastal feeding areas and swim offshore to what is called the White Shark Cafe.  This region a few hundred miles off Hawaii serves as a mixing area between the white sharks off Ano Nuevo and Guadalupe Island. From diving profiles it looks like they are feeding, possibly on giant squid but also on the elephant seals that migrate in the same direction, and they may be breeding there. This region is on the high seas where there are very little protections for these and other sharks, particularly from the depredations of the shark fin trade.

Approximately how many great whites are we talking about in this migration, hundreds, thousands? And has this number changed over time?

Like many sharks, we don’t know how large the population is. Many population estimates of sharks come from fishing. Fishing records suggest that the Northeast Pacific population prior to industrial fishing was greater than now, but we don’t know what that level was. We don’t really know how many white sharks exist in this population today or their complete range. Sharks are very difficult to study and count. One recent study based on photographic observations and a statistical model suggests less than 300 adult and subadult white sharks in the two major aggregations in California. Coupled with a similar prediction of about 150 off Guadalupe Mexico, this low population estimate raised concern among conservationists.  Although this doesn’t include baby and young sharks, and the sharks that are not mature enough to migrate, it suggests the Northeast Pacific population is small. Although we know this population has had impacts from fishing, and is still experiencing losses in gill nets, off shore in longlines and the depredations of the shark fin trade, we still don’t know how many there are, or how many we are losing. It raises conservation concerns, because as apex predators, sharks are critical for the balance and health of fish and marine ecosystems. We also know that most populations of large sharks have plummeted in the past 50 years, and many species are threatened or endangered. Globally it has been estimated that white sharks number around 3000-5000, with perhaps 1500 in our population, or as high as 3000 by another estimate. At any one point there may be only a score or so around the feeding areas off the Northern California seal rookeries, which is not very many sharks.

(Note) In response to an appeal to list this population under the Endangered Species Act, a recent paper evaluated the original data and  assumptions for population prediction used by the 2012 study by Chapple et al of the Tagging of Pacific Predators at Stanford University. The paper discounts the Chapple population prediction, and estimated a population as high as 3000 in this population. The TOPP lab is continuing their studies and stands by their original work. A paper published by Burgess et al 2017 using the same data but different assumptions suggests this population is far larger ranging from 1500-3000. The Federal and State ESA petitions were denied by the National Marine Fisheries Service and the Department of Fish and Wildlife.

I have heard these sharks migrate here because of the seal population, but does this migration coincide with larger number of shark attacks (of humans) in the area, and is this something surfers and divers should be concerned about?

The increase in large white sharks correlates with the pupping season of their favorite prey- elephant seals and we see hot spots of sharks around these seal colonies e.g. the Farallones, Ano Nuevo, and the Channel Islands. Human – white shark interactions also increase during these months.  We prefer to call them encounters or interactions and not attacks. Scientists like Dr. John McCosker of the California Academy of Sciences believe that bites on surfers and divers occur because we resemble their favored prey from beneath. White sharks attack from beneath in what is termed ambush behavior.  By the time they bite us and realize their mistake, its too late. On the west coast of North America, approximately 90% of the victims of a “bite and spit” incident survive.

Yes water enthusiasts should practice caution- especially around seal colonies.  Surfing or diving in buddy pairs is advisable. There is now a warning system when sharks are seen near the coast. We have a Shark Watch database we are developing on iNaturaist and have developed recommendations to avoid shark encounters.  We can, and we must coexist with this important, and increasingly threatened ocean predators.

Learn About Your Risk

What really is Sharktober then?

Sharktober is a celebration of white sharks, but really all sharks and the ocean we share. Shark Stewards launched Sharktober and Sharktoberfest celebrations in 2008 to celebrate the return of the white sharks to our Sanctuary offshore, and to educate and motivate the public to protect sharks. The first campaign was to drive support for the now successful California Shark Fin Ban introduced by Shark Stewards.  Since that time we have used these events with our partners at the California Academy of Sciences, the Gulf of the Farallones National Marine Sanctuary, the California Coastal Conservancy and other NGOS and agencies to reach over 10,000 directly in the Bay Area.

It is also a time for ocean goers to practice caution. We use Sharktober to turn the negativity of the press and the poor impression the public has about white sharks and instead try to bring awareness around the importance of sharks to marine ecosystems, and why we should protect them. That’s why we use Sharktoberfest events as a celebration of sharks and for the past eleven years Shark Stewards has intensive education and outreach efforts to appreciate and protect sharks.