On December 4, 2021 a 38 year old man was bit by a shark while surfing at the popular break Banyans in Kailua- Kona between the hours of 5:55 and 6 PM during a period of light rain. Veteran surfer Jared “Jahred” Willieford was waiting for a wave with a nearby surfer when the shark slammed into him and grasped his arm, pulling him off the board and submerging him before releasing. He reported the shark bit him then spun and hit him in the face with its tail. The incident was captured on a Surfline-surf camera. Once released he was able to swim to the adjacent surfer who applied a tourniquet with her leash. Aided by this fellow surfer, Mr. Willeford was able to come ashore and was treated by emergency responders for lacerations to his arm, before being transported to hospital.

This is yet the 8th confirmed incident of an unprovoked* shark bite on a human in 2021, and once documented, makes the 145th record maintained by the Hawaii Dept of Land and Resources since 1995. Consistent with long-term trends, in 2020 the United States experienced the most unprovoked shark bites in the world, with 33 confirmed cases according to the international Shark Attack File at the Florida Museum of Natural History. This is 19.5% lower than the 41 incidents that occurred in the U.S. in 2019. The 33 cases represent 58% of the worldwide total in 2020. This is a decrease from 2019 when 64% of the worldwide unprovoked bites occurred in the U.S. Florida ranked number 1 in the USA in 2020 with 16 bites, followed by Hawaii with 5, and California with 4.

Encounters between sharks and people are infrequent, and most inshore species are harmless and pose little threat to humans. Fatal shark bites are extremely rare, especially considering the number of people in Hawaii’s waters. Since the time that shark attacks have been recorded by DLNR, officially there have been 6 deadly shark attacks in Hawaii, and all of those have taken place on Maui. Those took place in 2020, 2019, 2015, 2013 (2), and 2004. Maui is the hot spot for human shark encounters followed by Oahu. Although Hawaii ranks high in bites, the central Hawaiian islands far exceed the number of incidents among the islands including the Northwest Hawaiian islands. This is likely a convergence of factors: population size and number of ocean hours spent, visitor load and migratory behavior.

The Hawaii Department of Land and National Resources Aquatic Resources Division (DAR) records indicate that there are usually 2 to 3 attacks around Hawaii per year, and almost all are non-fatal. On average, 60 people die each year by drowning in Hawaii, according to the State of Hawaii Department of Health Injury Prevention and Control Program. Hawaii follows Florida, and exceeds California in Shark Attacks. 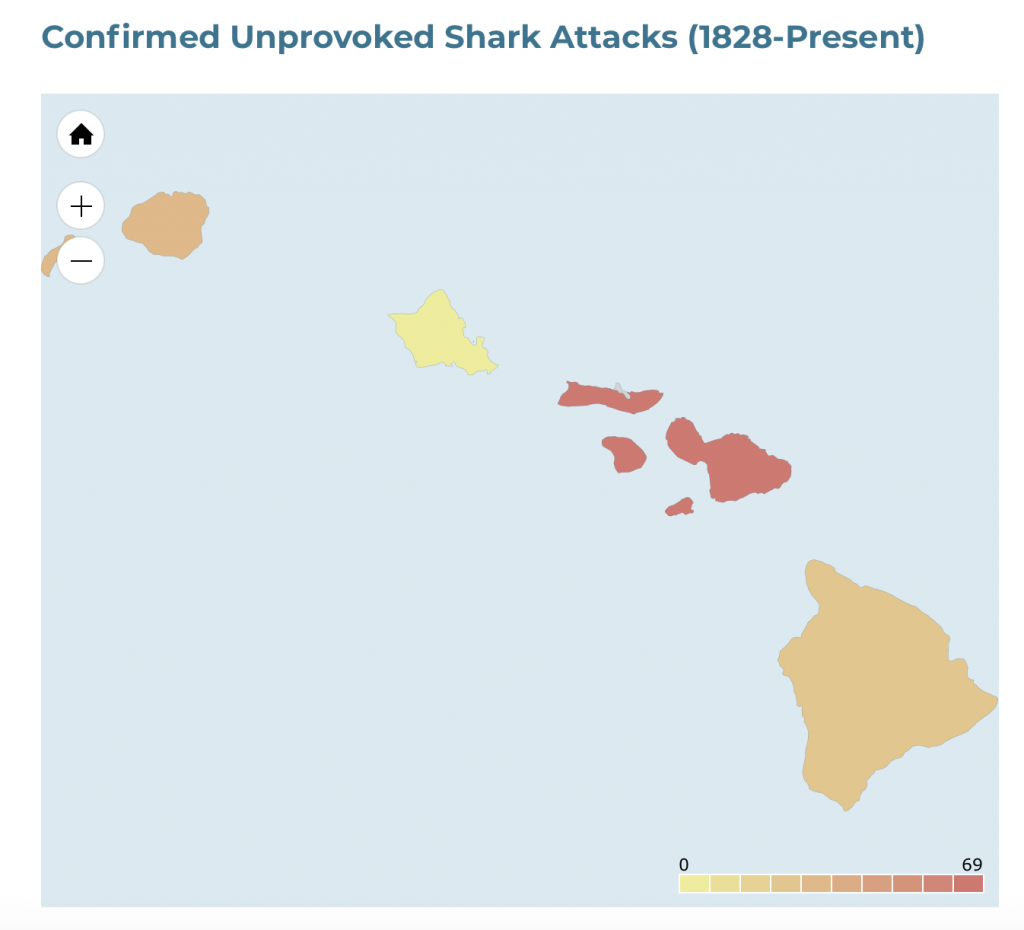 Approximately forty species of sharks occur in Hawaiian waters, ranging in size from the deep-water pygmy shark (about 8 inches) to the whale shark (up to 60 feet). About eight species are more commonly found in nearshore waters. The most frequently encountered are the whitetip reef shark, sandbar shark, scalloped hammerhead, and occasionally the tiger shark.

Sharks are highly adapted and have extremely well-developed sensory capabilities. They can detect sounds and smells from prey at great distances (up to a mile or more, depending on water conditions). Their eyesight is good, but depends greatly on water clarity. As sharks approach their prey, they can detect the faint electric fields given off by all living organisms. Receptors on their snouts, known as ampullae of Lorenzini, allow sharks to locate their prey without seeing it. Using these and other senses, sharks can locate prey in periods of low light or low water visibility

Although any shark may be potentially dangerous, especially if provoked, it is believed that only a few species of Hawaiian sharks have been responsible for biting people. However, many inshore species are difficult to distinguish from each other, and positive identification is often not made. DLNR records indicate Tiger sharks when positively identified, and as other requiem shark (eg reef shark, sandbar shark) if not otherwise identified. In cases where the shark can be identified, tiger sharks are the most common aggressor in Hawaiian waters. Hammerheads are also easy to identify, and have been implicated in a few cases where they may have been provoked.*

These larger sharks are apex predators, feeding primarily on fishes, but also large invertebrates and carrion. Sharks as apex predators maintain the health of reef ecosystems, regulating fish and marine mammal populations, removing sick and injured fish, leaving the healthiest to survive and reproduce. Tigers are considered the most dangerous sharks in Hawaiian waters. White sharks, which can also be dangerous, are rarely seen in Hawaii. Because of their size and feeding habits, tigers occupy the very top niche in inshore feeding relationships.

Although Hawaiian lore and artifacts have identified white sharks in Hawai’i, there has never been a documented case of a white shark attack on humans in Hawaiian waters. Researchers from Stanford University and Monterey Bay Aquarium have tracked white sharks to the Northwest Hawaiian Islands and the main islands of Hawaii from the west coast of North America as part of an annual migration.

Tiger sharks, (Niuhi in Hawaiian), frequent shallow water and are easily recognizable by their size, shape and behavior. Tiger sharks are large, up to 14 feet and 1400 pounds, with a  broadly rounded snout with distinctive curved serrated teeth and prominent markings. Young sharks have a distinct spotting pattern, turning to stripes in adults that fade with age. These sharks will alternate between coastal and pelagic (offshore) environments, from the surface to about 2500 ft. While swimming inshore the sharks move vertically between surface and the bottom to depths of about 300 ft.

Tiger sharks are often attracted to stream mouths after heavy rains, when upland fishes and other animals are swept out to sea. They can easily locate prey in such murky waters. Tigers are also attracted to waters frequented by fishing boats, which often trail fish remains and blood. Of all the inshore species, tiger sharks have the most widely varied diet. They eat fish, lobsters, birds, turtles, dead animals, even garbage, and may feed whenever a food source is present.

Adult sharks commonly consume large fish, seabirds, sea turtles, marine mammals and carrion. Highly investigative, these sharks are also known to bite and consume animate and inanimate objects. Land animals include rats, bats and several breeds of dog. They have sometimes been called the “garbage can of the sea” with items including: license plates, boots, cans of fish, barbie dolls, car tires, cameras and one shark was found with a complete suit of armor in its stomach.

According to studies published by researchers Carl Meyer, Kim Holland et al. of the University of Hawaii Shark Lab, peak shark incidents occur in Hawaii in October and November, and are dominated by Tiger sharks. Adult females that have been tagged and tracked in the Northwest Hawaiian Islands migrate south to the warmer waters of the main Hawaiian islands in these months

We are not certain why sharks occasionally bite humans. In provoked attacks, a spear fisherman or diver may stimulate an aggressive response. In other cases fishermen or dive tourism can stimulate a biting response by attracting the shark with a struggling fish or chum. In other cases it may simply be a case of investigation. The dominant theory, particularly with white sharks is that sharks mistake a person for a natural prey seen from below, such as a turtle or marine mammal. In the case of Tiger sharks, the shark may be trying to determine if a person is a potential prey item by mouthing, causing injury but not fatal injuries.

The victim claims the shark was an 18 foot great white shark. It is highly unlikely this was an attack by the white shark documented by diver/photographer Deron Verbeck the previous week in Kailua-Kona, Hawaii as speculated. The predation mode was different. In general, white sharks strike from beneath and behind in a behavior known as ambush predation. Additionally, an adult great white shark like the fifteen foot female observed by Verbeck would have done far more damage. Examination of the video on Surfline shows the disturbance but does not allow accurate identification. The nature of the injury including distance between punctures on the forearm (above) suggest a much smaller shark. The shark involved in the December 4, 2021 incident was likely a tiger shark, or possibly a blacktip reef shark reported by surfers to be acting aggressively in the area the week of the attack.

Following national trends, surfing is the highest risk category associated with shark attacks followed by swimming. The risk of injury caused by sharks is extremely small, but it should be considered when we enter the ocean. By learning more about sharks, using common sense, and observing safety tips such as participating with a buddy, the risk of an encounter can be greatly reduced. Millions of people work, play and enjoy the waters of Hawaii each year. People who enter the water need to recognize that there are dangers above and beneath the surface. Many marine animals can cause serious injury to people, and sharks are just one example. Entering the ocean is like entering the wild and humans share the ocean with other species, including sharks.

*Provoked incidents are defined by the International Shark Attack File as
occurring “when a human initiates physical contact with a shark, e.g. a diver
bit after grabbing a shark, a fisher bit while removing a shark from a net, and
attacks on spearfishers and those feeding sharks.” Incidents resulting from
fishing activity are generally considered provoked. Sudden activity next to a
shark, such as falling off a surfboard, may also result in an incident being
classified as provoked.

**Unprovoked incidents are those “where an attack on a live human by a shark occurs in its
natural habitat without human provocation of the shark. Incidents involving shark-inflicted scavenge damage to already dead humans (most often drowning victims), attacks on boats, and provoked incidents occurring in or out
of the water are not considered unprovoked attacks.”