I am an open water swimmer. Like a few hundred others at the South End Rowing and the Dolphin Club, I routinely swim in the Bay year round, without wetsuit.  But there are swimmers and there are Swimmers. An arcane group of athletes around the globe take on extreme athletic challenges, crossing large portions of open water without protection.  The English Channel is a well known passage, but there are many lesser known swims with greater risk and more extreme conditions.
Known as the Ocean 7, elite open water swimmers take on crossings like the Cook Straits, the Molokai Channel and Tsugaru Straits of Japan. Not part of the Ocean 7, but what many consider the most difficult of ocean passages is called the Farallon Island Channel.  This swim, now sanctified by the Farallon Island Swim Association combines cold water, strong currents, stinging jellies and the presence of great white sharks.

The first two solo crossings from the island to the shore were in 1967 as part of a friendly rivalry between two swimmers from the Dolphin Club.  Starting at South East Farallon Island (SEFI) Dolphin Club member Lt. Col. Stewart Evans completed the first crossing to the coast, finishing at the beach near Bolinas in 13 hours, 44 minutes.  In early September, few weeks later Ted Erikson started swimming at SEFI and swam all the way to the Golden Gate Bridge in 14 hours, 38 minutes.  Since then, a few relay teams have made the trip across in both directions, but until June 2014 no one has made a complete solo crossing. This June, an accomplished distance swimmer, Coloradan Craig Lenning made the attempt to cross the Gulf to the Gate. Currents off Point Bonita caused Craig to miss the bridge but he successfully landed at Muir Beach in 15 hours, 47 minutes. 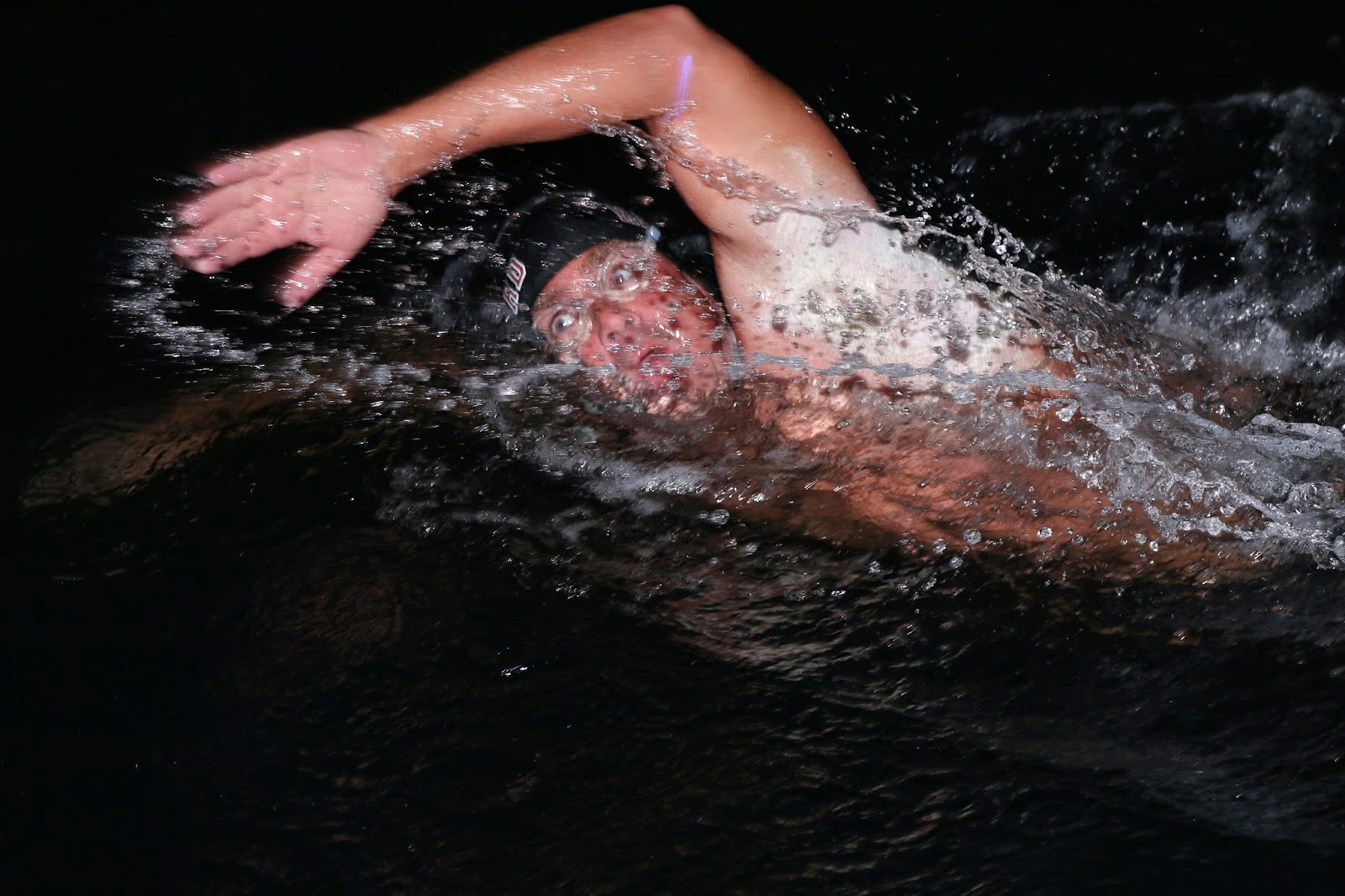 My friend Joe Locke has long had his eyes on this goal.  A soft spoken, hulk of a man, Locke has swum the English Channel and many other distance challenges.  When asked to advise him on sharks and the islands last year, I gladly joined his team to help escort him safely across the Gulf of the Farallones.
One of the great challenges of this swim are the conditions off our coastline. Coastal upwelling brings up deep nutrient rich cold water creating an abundance of life and the conditions for the summer fog we know so well. Storms from the Aleutians and localized northwest winds generate large swells, wind waves and strong currents. And then, there are the sharks.
Everyone talks about the sharks but few see them. In fact, most of the large white sharks of are still offshore in early summer, heading back home on their migration from the White Shark Cafe.
Although some white sharks stay in the region year round, the odds of a shark encounter get higher as the water warms and the season progresses towards Sharktober. Surfers, swimmers and divers have experienced encounters along our coastline.  The risk is always present, yet the odds of encountering a shark are lower than other wildlife.  In fact, more swimmers get bit by Sea Lions locally than Sharks.  Still, the sharks are here and its part of the risk we take surfing, diving and swimming in the Red Triangle. Swimmers considering the Farallons passage must weigh water temperature and weather against the increase risk of encountering a white shark as the Sharktober season progresses. It is not advisable to attempt swimming or even kayaking around South East Farallon Island when the large sharks are present in numbers roughly between August and December.

This was Joe’s 7th attempt and my third supporting him, and this time, the conditions looked ideal. On one swim Joe nearly made it to Point Bonita before being denied by the mighty ebb tide that pushed Evans and Lenning north. On this passage the tides and waypoints had again been carefully calculated. The weather pattern looked like it would hold for one day, and now it was up to Joe. Previous attempts had been too rough, or the water temperature in the high 40s made it impossible to stay in the water. Onboard were a team of experienced ocean swimmers including Marathon Ocean Swimmer Evan Morrison who acted as official observer.

Joe plunged into the darkness at the SEFI buoy a shade after midnight.  The sea lions and common murrres serenaded us as the 34 foot Hyperfish support boat followed behind as he immediately stroked east away from the rocky island.  His stroke rate was high, in the mid eighties, but the water temperature at 53 and calm seas boded well once he settled in. He soon left the odor of sea lions and murres behind but drifted over and through patches of stinging nettles.
For the first few hours Joe swam steadily between two and three miles in an hour. Every 40 minutes we fed him his home-brewed super food tossed out in water bottles on a line. No sharks came to visit, but a Sea Lion followed him for an hour, swimming beneath and bumping him from behind. 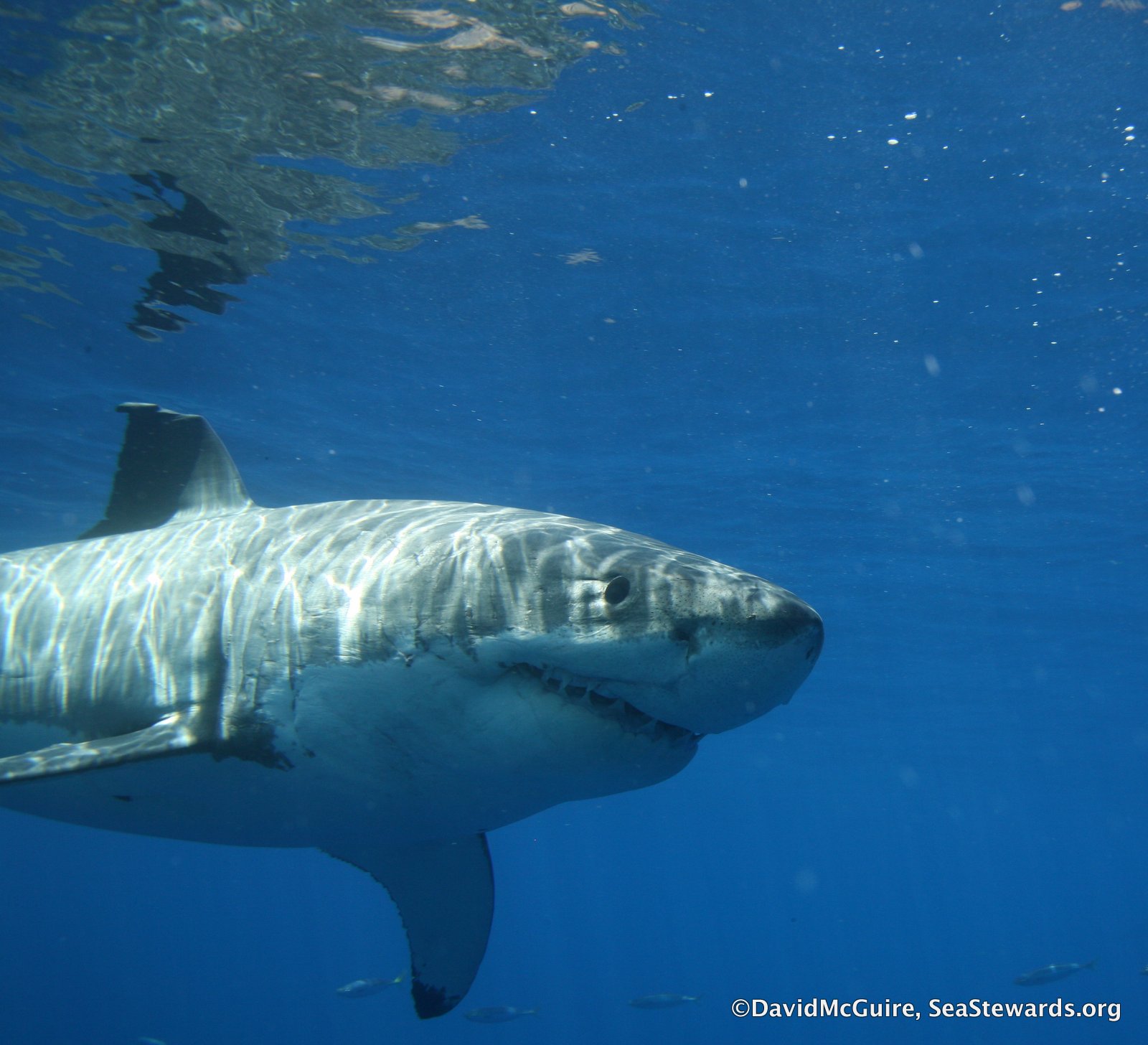 The swim observes the Channel Rules, and is sanctioned by a Farallon Island Swim Foundation. The rules allow no assistance and no touching the boat, a swim cap, suit and lanolin for chafe and not much else.  Joe swims like the water polo player he once was,  with a strong open stroke and a regular heads-up every 4th stroke.  Joe swam steadily through the night, braving stings from the jellyfish as he pushed through the bioluminescence. Sunrise found us just where we wanted to be, but we ran into the first of the waning ebb 12 miles out from Point Lobos. Joe powered through this sticky water but his rate dropped below 2 miles/hour and we worried about making the flood tide before it turned. It took 3 hours to push past a back eddy north of the Four Fathom Bank, but our speed picked up and making the tide looked hopeful. Tankers exiting the bay and cargo ships behind all converged as we came abreast of Bonita Channel. On a building breeze kite sailors and yachties cheered as the swimmer chugged steadily up the channel. The clock ticked and ahead inside the Gate I could see the green water of the ebb tide meeting the flood. We were running out of time. Ship traffic pushed us towards the south tower close to the footing where the current surged into a standing wave. Joe’s stroke rate increased slightly as he sensed the imminent river of water prepared to deny him once again.

Joe had hoped to swim to Aquatic Park but as he neared the bridge the going got really tough right when he least needed it.  The last half hour against the building ebb made the bridge an acceptable goal and he reached out and touched the pier footing to the cheers of the crew.  Powering through the final chop, 13 hours and 58 minutes later Joe cleared the shadow of the Golden Gate, becoming the second person in history to make the swim. This time beat both of the two other 6 person relays accomplished by the venerable Night Train Swimmers.
It felt great to support and document this epic feat of endurance.  This swim takes speed and power in addition to all the other traits that make up a successful ocean swimmer.
Training, commitment, concentration and a little luck put Joe into the history books. Many have their eye on this crossing, but the swim from the Devil’s Teeth is not for the faint of heart, even among the marathon swim crowd.
I think I’ll stick to diving with sharks.